A quick addendum to the earlier blog. 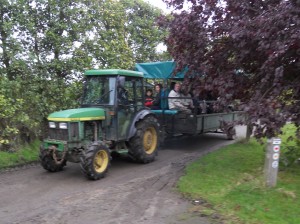 This one features a two minute clip I took on a tractor ride through one of the orchards yesterday at Brogdale. It’s a little bumpy, but you’ll get the scale of the place. There’s a commentary from the pleasant and knowledgable guide.

It was apple weekend at Brogdale (20th, 21st October). You’d expect there to be plenty of apples and, of course, there was. 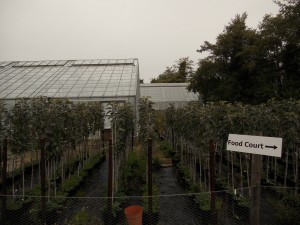 But, I was surprised by the number of stalls selling everything fruit related; wines, juices, paintings, sculpture. And then, of course, there was the non fruit related stuff; jams, herbs, sweaters, hats, fridge magnets, weather vanes. And, at least two live music tents, and plenty of up-market burger vans (the one I tried was foul). And the rumour was, that Marco Pierre White [the twitter rumour-mill got it wrong - it was Raymond Blanc's day] was going to be there on Sunday to judge the baking competition. Do you also miss the days when judging cakes and preserves was the genteel reserve of the ladies of the WI – before Tee-Vee and celebrities got in on the act?

I tasted plenty of apples - so many apples. Eventually I simply couldn’t taste any more. I made copious notes, I took a guided tour of the orchards behind a tractor. I bought bags of apples and will be ordering a small orchard’s worth of new apple trees in the next couple of weeks. I just have to figure out where to put them. 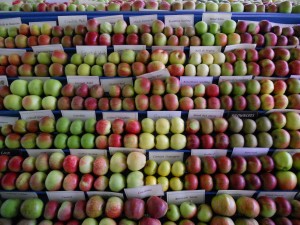 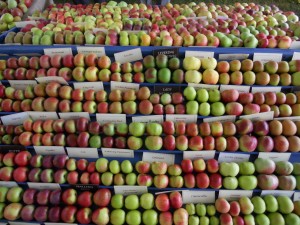 I got chatting to a man-with-a-badge about the online National Fruit Collection – you can search their online database, it really is fantastic. I said I’d previously been using the brilliant and scholarly book by Joan Morgan. “Oh, she’s sitting over there, helping to sign up new friends,” he said. Obviously I went and said hello, I’m a big fan, and all that. Her book is an encyclopaedic listing of more than 2000 apple varieties, it has detail description, tasting notes and occasional personal observations. I urge you to buy her book.

For more on the National Fruit collection archive: http://www.nationalfruitcollection.org.uk/search.php 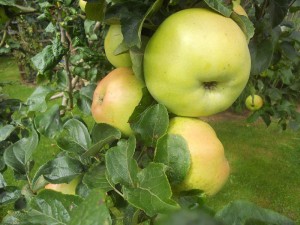 photo: Arthur Turner apples on a tree in my garden.

I like apples, but I love apple trees. As a child I had a favourite climbing tree – it was, of course, a huge apple tree. My sister preferred the pear tree right next to it. We’d scramble up our trees and throw fruit at each other.

As an adult I now just sit around underneath the trees. There’s nothing nicer than a mature apple tree in the garden. Luckily our house has a huge Bramley tree in the garden (it’s no exaggeration to say it was the reason we bought this place). It is bigger than the house, and certainly older. It provides far too many apples. When they’re in season we eat them almost daily, make a years supply of apple sauce, give away as many as we can, and still half the crop falls to the ground.

It’s nice to have such abundance, but variety is also welcome. When we moved here I planted some more trees. Herefordshire Russet, Orleans Reinette, Lords Derby and Lambourne, James Grieve, and Arthur Turner.

The first five are still relatively immature, but the Arthur Turner is a vigorous fast growing tree. After only eight years it is 12ft tall, just as wide, and providing a very good crop. The fruits are huge, a big one can be six inches across.

But all is not well in my little orchard. The Bramley crop this year is awful. The tree looks thin – fewer leaves than normal, the fruit is sparse, small and covered in little black spots. The apples are inedible. Annie was round at her fathers this morning, it seems his Bramley tree is suffering from the exact same thing. I expect they’re both suffering with the odd weather we’ve had this year – it seems more likely that both contracting the same fatal disease at precisely the same time.

So we have, effectively, no crop from one tree (yet still the burden of collecting the hundreds of windfalls for compost). At least I’m happy that the tree isn’t ailing; fingers crossed – it should be okay again next year. Small consolation though when I’m in the Greengrocer’s buying Bramleys again for the first time in ten years.

Bramley apples cook to a pulp, a smooth puree. They do not keep their shape, as do the Arthur Turner. Apple sauce is a cliché, but why would you buy a jar of the stuff. Even if you have to buy the apples it’ll still be far cheaper, and infinitely better.

Take two Bramley apples – peel, quarter and core them. Cut them into little chunks. Put them in a small saucepan with no more than a splash of water, and two teaspoons of sugar. (This will make a sauce that is considerably less sweet than the commercial product, which is, I think, a good thing.) Set it to gently simmer for fifteen or twenty minutes until the apples have cooked down to a puree. Remember to stir it occasionally, to prevent it from sticking.

Hot apple sauce is just as good as cold with pork chops or sausages or a Sunday roast.

If you are lucky enough to have any left over, it will keep in the fridge for a few days. It’s worth noting that if you want apple sauce for a year, then it must be much sweeter and cooked more like a marmalade or jam to avoid spoilage.

Combine equal quantities of cold homemade apple sauce and gently whipped cream. Once the apples and cream have become one, spoon it carefully into delicate wine glasses.  Unbelievably good for something so simple.

I was lucky enough to get hold of a couple of monstrously big cooking pears this week. The variety was Catillac – also known sometimes as Pound Pears. Each pear can weigh a pound, I weighed the heavier of the two – 1lb 1oz. Amazing.

They’re cooking pears, and like the Royal Worcester variety cannot be eaten raw. If you don’t have cooking pears, use any of the commonly available eating varieties – just skip past the poaching bit, and get straight on with the baking.

This is really a variation on Eve’s pudding. As you might guess from the name, that version has apples in it.

Serves four, maybe six
For poaching the pears – One big Catillac pear, or two or three smaller eaters. A tablespoon of sugar.
For the sponge – 100g butter, 50g caster sugar, 2 eggs, Vanilla (either the scraping from a pod or a little splash of vanilla extract), 100g self-raising flour.

Start by peeling and quartering the pears. Remove the cores and trim the ends. Cut each piece in half lengthwise (this gives you eight big pieces in total). Then put them in a saucepan with just enough water to cover. Add the sugar and gently poach until just tender when prodded with a skewer. Drain and allow the pears to go cold.

Meanwhile make the sponge topping by creaming the butter and sugar until pale, then mix in the eggs one at a time. Stir in the vanilla, then fold in the flour.

Use a favourite pudding dish, ideally one that will take the pears slices comfortably in a single layer. Lay the pear pieces in the bottom of the dish and cover with the sponge topping.

Bake in a medium-hot oven for about thirty minutes or until the top possesses a gentle golden glow and the sponge is firm in the middle. Perhaps sprinkle a little extra caster sugar on top. Serve warm, not hot, with custard.

Variation: I made this recently in a cake tin, then turned it out and let it go cold. I dusted the top with icing sugar and served it with whipped cream.