Twitter reminded me about Gurneys. More specifically that it had been voted a very good fish shop. One of the best. It was listed, in a piece in one of those Sunday Supplement magazines. Raffi’s in our nearby hometown of Sudbury won a mention as the best place to go to for Indian spices in all of East Anglia (and is where I go). Gurneys got the gong for best fish shop in the whole rump of England. 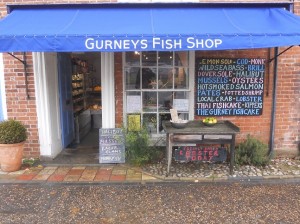 When we’re up in Norfolk, we get some fish in either from Gurneys, or a little garage/shed on the coast road – mainly we go there for mussels and crabs, Gurneys for everything else. Years ago, Annie and I first lost our bowls of Moules Mariniere to the inquisitive children in one of the sheds on Mersea Island (we had to eat their children’s portions of Fish and Chips). Ever since then, mussels have been one of their favourite seaside dinners.

Another thing Gurneys do very well are the bits and pieces that come in pots. Things like potted shrimp, mackerel pate, crab pate, and dressed crabs, plain crab-meat, English fish cakes, and Thai fish cakes. And an invention – I think – of theirs; cray’n’aise. I think you can figure that one out. (I must say though, that the crayfish in the last one I bought were so overcooked everyone refused to eat them. Previously, it has been spot on.) 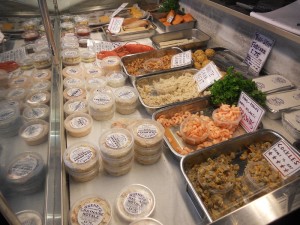 They have one counter for all those things, and another for wet fish. The wet fish is spanking fresh, and the shop certainly has the turnover to keep it that way.

There’s the full spectrum of smoked fish too. Inevitably, you can get all the extra bits and pieces for your fish frenzy: lemons, garlic, onions, homemade mayonnaise, pink sauce, tartar sauce, various exotica in jars and vast bunches of flat leaf parsley.

I’m familiar with the Hoste – the Gastro Boutique Restaurant and Hotel in Burnham Market, Norfolk. I’ve been here many times before, first when it was still just a pub, some twenty years ago, and more recently for a night away when Annie and I somehow managed to arrange three concurrent sleepovers for the children. 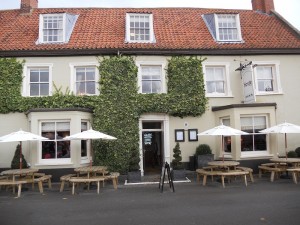 On one of these nights out, I ordered the most bizarre starter; pigeon on toast with fruit jus and black pepper icecream – it was at least two courses on the same plate at once. I was expecting some genius revelation combo of previously unthought-of and unmarriable ingredients – but, it was even more awkward than pigeon and icecream sounds. You hope for more than the sum of the parts, what I got was an essay in subtraction. I spoke to a chef friend, and asked him why something so ill-conceived hadn’t been pulled straight off the menu? “Oh, no. Disasters like that can stick around for ages. Everyone assumes it must be brilliant so they’ll order it – once. Emperor’s new clothes.”

On this occasion though it was October, a damp late Sunday afternoon. I was with our six year old daughter. “I’m hungry, Daddy.” I’d thought to get her a fizzy orange and a packet of crisps in the bar, but it was packed and very loud, and it stank – I mean really ponged – of wet spaniels. We went through the back to the bizarrely African themed conservatory.

Kitty is very fond of ordering tea. I think it’s anAlicein Wonderland thing. She’s Alice, of course – I guess I’m everyone else. I ordered her the Jubilee Afternoon Tea, ‘a selection of sandwiches, a homemade scone with jam and clotted cream, a selection of cakes, and a pot of tea.’ It arrived, as you would expect on one of those triple-stacked tiered-plate arrangements. Square plates on this occasion.

The egg mayo sandwich was good enough that I didn’t get a look in, the same with the ham sandwich. The smoked salmon and cucumber sandwich failed. It is normally two distinctly separate sandwiches, it was not a happy combo. Kitty further turned her nose up at the idea of a scone with jam and clotted cream, so I ate it. The scone was hot from the oven, and had sultanas in it – always a mistake in a scone served with cream. Nice to have some proper clotted cream though. 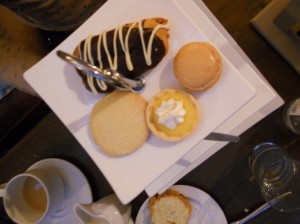 The cakes where good, although the miniature meringue on top of the bite-sized lemon tart turned a decent lemon tart into a silly lemon meringue pie. A good eclair, a nice macroon, and a shortbread biscuit all devoured by a hungry six year old.

As I was paying the bill I asked the waitress why it was called a Jubilee Tea? “Why – it’s the Jubilee year! And it’s been very popular – so we’ve just kept it on the menu.”