I made a lasagne the other night. All exactly as you’d expect, but instead of minced beef, I used some roughly diced kobacha squash. Everything else – by the book. The lasagne was fabulous, but there was some of the stewed squash left over. I put it in the fridge – you never know.

Today, staring into the fridge, wondering about lunch, I pulled it out, blitzed it with a whiz-stick, warmed it though and poured it in a bowl. A lick of cream on top and a piece of toast on the side. A perfect lonely lunch. 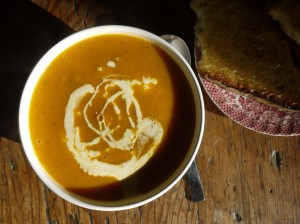 Nothing spectacular, nothing out of the ordinary – just good honest home cooking.

The squash that Phil delivered last week became a pasta sauce. It was a Crown Prince variety, green skinned, and with deep orange flesh. For two of us, I used half the squash. The other half was devoured by the children, just plain roast in wedges with some sausages and mash.

Halve the squash and remove the seeds with a spoon. You could peel the squash now, or leave it until the pieces have cooked. Either / or, you choose. Put the pieces on a roasting tray with plenty of unpeeled garlic cloves and half a dozen Thyme twigs. A quick glug of olive oil will stop anything from sticking too badly. Roast in a hot oven until the squash has softened and the garlic smells ready.

If you haven’t previously peeled the squash, do it now. I used a spoon – it’s not the least bit difficult. Bring a pan of salted water to the boil and cook your favourite pasta. The other night we had spaghetti – a big flatter shape would also hold this sauce well. Put the squash pieces in a bowl, and squeeze the garlic out of the skins. Rub the thyme leaves from the stalks. Try hard not to break up the squash any more than you need to, this will all happen as you start dressing the pasta. I mixed a little crème fraiche into the garlic and then folded that into the squash. Taste, season, perhaps a squeeze of lemon, maybe a shake ofTabasco.

When the pasta is ready return it to the pan with a splash of cooking water and the sauce, fold carefully together to try and avoid mashing the delicate squash.

Serve it up on some warm plates, with a quick swish of olive oil over the top. Perhaps some grated parmesan too. I happen to think that crumbled amoretti biscuits are perfect on top of this. Try it, it’s a revelation. But beware they go soft very quickly, so you may want to be a bit precious about it and serve the crumbled biscuits separately at the table. Just add enough to your plate for a few mouthfuls at a time. It’s a bit affected and on the borderline of being a chore, but it really is worth it.